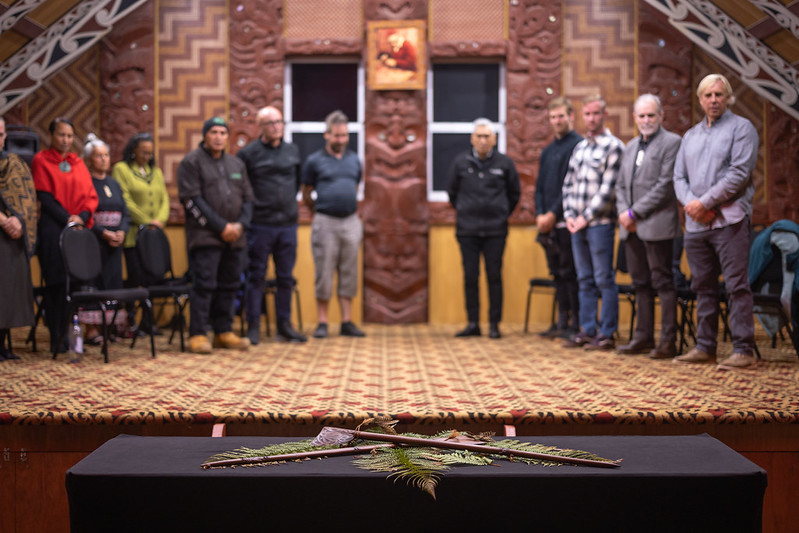 A traditional Māori welcome, iconic Kiwi track, real fruit ice cream, trail doggos, good vibes, and real quick humans all came together to kick off Crankworx Rotorua 2022, reminding the world of one thing that’s abundantly clear: New Zealand knows how to bring the vibes to mountain biking. Several of the world’s best lined up for this classic Rotorua race, but it was the Kiwi locals who came out on top.

Athletes and organisers were invited to attend a pōhiri (traditional welcome) at Te Puia, home to the New Zealand Māori Arts and Crafts Institute on Sunday after a day of fierce competition. Local iwi and mana whenua representatives gathered to welcome international Crankworx riders and visitors to the event and the region. Darren Kinnaird, Managing Director of the Crankworx World Tour acknowledged the 8 beating hearts of Te Arawa.

“We are honoured that you welcome us so that our hearts may beat in time with yours.”

“I just love how our people welcome manuhiri – with acknowledgements of all the factors that contribute to the cause, and with karakia and waiata to put minds and hearts at ease. We all have such a big week ahead of us and the opening gets us all set on the right trajectory for the moments that are to come.” said Ariki Tibble, Crankworx Rotorua Event Director.

Tere Panuku was the te reo Māori name bestowed on the festival by Kingi Biddle, Pūkenga Mātauranga Māori (Māori Knowledge Specialist), in 2020. It translates to: to glide, soar and rise. After a big day of racing under riders’ belts, “Tere Panuku” can well and truly be considered on.

The Crankworx Rotorua Taniwha Downhill track described by Crankworx Downhill Manager Dave Hamilton as “well known in NZ as the OG!” welcomed 184 racers, pro and amateur, to the Whakarewarewa Forest – the only event held in the forest as the festival now moves the epic racing action to Skyline Rotorua. The event was free for Rotorua locals and spectators to attend as fans were fizzed to return to the festival for the first time since March 2020.

“It was probably the biggest amount of people I’ve seen out watching in the Redwoods. It was pretty awesome.” said Blenkinsop.

This year’s track is 2.3 kilometers long, with an elevation drop of 320 meters, the Taniwha DH features a mix of tight technical sections, slick roots, high speed drops, jumps, and full on gnar with one section seeing riders hit speeds around 60km/hr. New this year, the sprint to the line featured a motorway section resembling a supercross straight rhythm of doubles, whoops and steep on/offs. The last steep section resembles a tree stump graveyard and shoots riders into two gap jumps.

Just like the ongoing battle over who created the pavlova, it was a real Kiwi vs Aussie showdown in the first event of the festival. Christchurch local and crowd favourite Sam Blenkinsop won the men’s final with the fastest time of the day and a commanding lead, over three seconds ahead of Australia’s Jackson Frew. Hawkes Bay local Brook MacDonald took third in his first Crankworx event of the year against fellow Kiwi Matt Walker.

“Obviously it’s awesome to win and to win by a pretty good margin. I feel good. It’s just good to be back home in New Zealand and riding Rotorua. I’ve grown up racing here. This was my first Nationals race, racing here and did well, so it’s always cool to come race in Rotorua. The dirt’s amazing, you just have fun riding your bike.” Said Blenkinsop.

“I think anyone that comes to Rotorua has a good time riding. It was kind of cool how the format was, we had lots of time this morning. So, I was out on my e-bike, riding all the trails. Every time I come here there are so many new trails. We’re pretty lucky here in Rotorua, and everywhere in New Zealand now. Just how the trails are evolving.  It’s awesome. And like I said, it’s cool to win.”

The competition was no different on the women’s side. Although Aussie Sian A’Hern clocked the fastest time of the day for the pro women, Rotorua local and Junior Women’s DH World Champion Jenna Hastings who lives just five minutes from the Whakarewarewa Forest did not go down without a fight landing second place in front of friends and family. Hastings earned some serious mana at Crankworx Rotorua 2021, landing herself on the podium in every race she competed in. Will she do it again in 2022?

Standings – King and Queen of Crankworx

As the final of four Crankworx World Tour stops, Crankworx’s top all-round athletes are in hot pursuit of King and Queen points at Crankworx Rotorua.

Blenkinsop’s win today pushes him up to fourth in the overall standings, while Jackson Frew’s second place finish pushes him into third. Bas van Steenbergen finished his day in sixth, which adds to his points stash as he sits at the pointy end in first.

The women’s results don’t shuffle, but tighten up, with the top three remaining the same. Jordy Scott sits in first, one point ahead of Vaea Verbeeck, and Caroline Buchanan close behind in third. Scott finished eighth today, Verbeeck fifth, and Buchanan 10th.

Festival passes are still on sale for Crankworx Rotorua 2022. Do not miss your chance to rub shoulders with the world’s mountain biking Elite and watch them race right on your doorstep. For additional information and to purchase tickets, visit crankworx.com

You are here: Home / Traditional Pōhiri Welcomes Crankworx 2022 to Rotorua